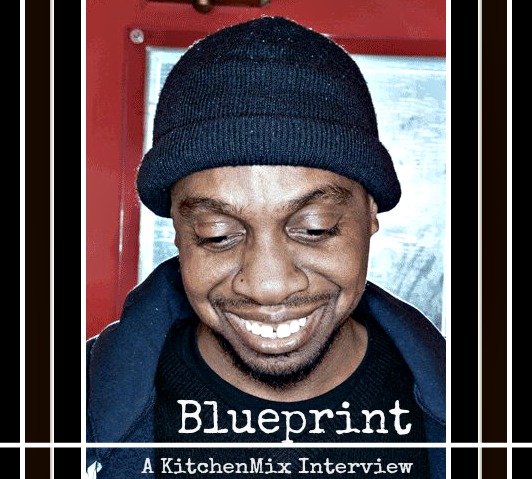 Back in 1990 KRS-ONE dropped the first Hip Hop song I had ever heard that had an an anti-meat message. It didn’t really make a big impact on me at the time, but it was always there in the back of my mind. And let’s not forget that a year before that he gave us the Blueprint for Hip Hop, (that did stay with me). Years later a new Blueprint was introduced to the Hip Hop scene and this one successfully recreated what KRS-ONE and others had pioneered with a super-slick release called 1988. Printmatic, Ohio’s phenomenal producer and emcee stepped onto the scene with his 2005 tremendous solo effort (that ranked among my favorite albums of that year). Dude had already been on my radar with projects he had put out with Soul Position and Greenhouse Effect – actually, the first time I had heard him was on the Orphanage Freestyle on Sage Francis’ Sick of Waiting Tables.

Now, in 2013 I had the opportunity to chop it up with Blueprint and have a meatless conversation about food. So, if you’ve ever been curious about why a red meat diet might not be for you, go back and hear what KRS has to say on the subject. And if you’re curious about what a plant-based diet is like, follow below for our interview with Blueprint.

B: For me, the music I create is just an expression of my personal life and my environment. If my personal life and environment are out of balance then everything I create will be out of balance. Conversely, when my life is healthy and balanced, my music is healthy and balanced. Food plays a major part of that. It’s the one thing we control every day that has the most impact on our lives. The times when I had the worst eating habits and lifestyle were the times when my music was the most inconsistent. I was eating like a complete jackass and had a really tough time gaining momentum and finishing the projects I started. It’s hard to do something with consistency when you don’t have the proper energy and demeanor. A person who eats bad is always complaining about headaches, stomach viruses, and not having enough energy. Before I got my diet together, I was eating things that put my body on a roller coaster and were detrimental to my long-term health. I’ve seen a huge change in my productivity since I’ve got my diet right. As a result, I get so much more music done.

TKM: Do you get around in the kitchen pretty well? How would you rate your kitchen skills?

B: Honestly, I don’t think I’m a good cook at all. But at the same time, I don’t think anybody needs to be a good cook if they’re on a plant-based diet simply because pretty much all natural things go together. My creativity in the kitchen is really high, so I always come up with really great simple dishes, but I’m not sure I would consider myself a good cook. I’d give myself a 5 in the traditional sense of cooking, but maybe a 7.5 in terms of preparing plant-based meals.

B: The biggest change in my diet has been that I’ve adopted a plant-based diet for the most part, so I rarely eat meat anymore. I do have one day every few weeks where I might have a really small amount of meat, but outside of that I’m pretty much plant-based. I try to stay away from refined sugar as well, so I only drink water; no soft drinks, candy, or anything like that. I also threw away all of my canned foods and boxed foods as well. No more of that for me.

TKM: When did you start to incorporate a raw diet into your lifestyle and how did that come about?

B: I didn’t start really experimenting with it until around 2011. The change was sparked by my decision to stop drinking in 2010. Once I took alcohol out of my life, I was forced to evaluate everything about my lifestyle, which included my diet. I was sober, but was still drinking a ton of soda and eating dumb stuff all the time; pretty much the same Western diet as everybody else. Around 2011, I started to conduct some experiments on myself with raw food and started seeing how big of a difference it made in my health. When I started embracing raw food, I started seeing huge changes like my skin clearing up, the hair on my goatee stopped getting grey, and my energy went through the roof. I started sitting down every day and making a conscious effort to get familiar with fruits and vegetables in a way that I never did before. I would sit down at the table in the mornings and just slice up different vegetables and fruit, tasting and combining things. I was trying to learn to taste again because eating a highly sugary and salty diet had ruined my taste palette. At the same time I was going through these experiments, I had some family members get sick. I felt that I had to gain a better understanding of diet to help them with their sickness, so I dove deeper and deeper into it.

TKM: How does tour life affect the type of lifestyle you’re trying to maintain at home?

B: Well, it used to affect me really negatively, but not as much anymore. In the past, I would gain momentum by eating right and taking care of myself at home and then lose momentum because I wasn’t able to maintain it on the road. Last year, I decided to start bringing cooking equipment with me on the road so that I could prepare my food anywhere. Since I’ve been doing that it’s been so much easier to maintain my lifestyle and diet. I make it a priority to prepare my own meals as often as possible. It’s created a situation where I feel really healthy even when I’m on the road and I have more energy to accommodate the rigorous tour schedule.

TKM: Do you have a recipe that you could share with us (so we can make it and share with our readers)?

B: Sure. I’ve got a cool breakfast thing I came up with the other day that people can eat instead of cereal:

– Half Cup of unsalted sunflower seeds

– Half a cup of raisins

TKM: Do you have a favorite raw food chef? Is there a certain raw food protocol that that subscribe to?

B: Unfortunately, I don’t really know much about the raw food scene or any of the chefs out there. I try not to get too dogmatic in my plant based approach because access is always an issue. Sometimes you don’t have access to everything you want and have to make the best decision based on what you have.

TKM: Are there any downsides to eating raw? (example – holidays, kids, accessibility)

B: I think the biggest challenge for people that change their diet like that is learning how to communicate it to your family and friends in a way that isn’t condescending or snobbish. I realized that one of the reasons I never looked into it before was because I found that the people around me who did it before me seemed to use it as a way to either put other people down or to boost themselves up–never to help others. My reason for adopting it was to be healthier myself and help my friends and family who suffer from degenerative diseases related to dietary choices, so my motivation is a little bit different. I want to help and be an inspiration to the people in my life, so my biggest challenge is trying to approach that in a way that’s sensitive and informative, but doesn’t alienate them.

B: At this point, I’d be happy if my family let me prepare a Thanksgiving dinner. That probably seems like such a small thing, but it would mean a lot to me.

TKM: What are some of the most essential ingredients/grocery items that you would recommend to someone starting to get into a raw food diet? Is there any advice you would give to that person?

B: My advice to them would be to first learn how to taste again: go to the produce section of the grocery store and make it a habit to buy three or four things that you’ve never eaten raw. Then take some time to taste them raw, without anything added to them. Obviously that wouldn’t necessarily work with things that need to be cooked like green beans or corn, but it’s great for things like mushrooms, onions, carrots, and okra, etc. The goal is to regain your taste for natural things that don’t have salt and sugar added to them. Most people know what orange soda or a box of orange juice from a box tastes like, but haven’t had a real orange in years. As a result, they have no idea what an actual orange tastes like anymore. If they did know what an orange really tasted like, they would know that something is clearly wrong with the orange juice they’re being sold–unless they see it squeezed in front of them. You have to go through the process of retraining your mind and tongue to love the taste of natural things, or you’ll never get anywhere with it.

TKM: Are there any specific kitchen tools/equipment that you would recommend?

B: A Foreman Grill, a rice cooker with a steamer, and a cutting board is all you really need to get started. Anything I don’t eat raw is thrown on the Foreman Grill or steamed.

TKM: True or False: You are what you eat.

B: Emphatically true! Food can heal you, or it can kill you.

TKM: What upcoming projects do you have on the horizon?

B: I’ve got a book coming out in January called “What A Night” that’s about the worst shows of my touring career and a new EP coming out this spring called “Respect the Architect.” I should be touring this spring as well in the United States, for those that wanna check me out.

This is the kind of information that I think is important for the Hip Hop generation. Two things that really stayed with me from what he said were: 1. it’s about retraining ourselves to taste natural foods and 2. following a plant-based diet doesn’t have to be dogmatic. I think that too often people are more concerned with titles like vegetarianism and following certain guidelines that they forget that the overall goal should be health. Listening to your body and finding the right combination of foods for your constitution is probably the most essential idea.

Please be sure to go back and familiarize yourself with Blueprint’s discography, if you’re not already. Like I said, 1988 is a personal favorite but also make sure to check out everything HERE as well as his work with Illogic that you can grab HERE. And if you can find a copy of his Lo-Fi Funk EP I’d highly recommend that. You already know that he’s got a new book coming out at the top of the new year but make sure to go and grab Word is Blog: Volume One and The Making of Adventures in Counter-Culture. I just ordered my copies. Keep up with my dude on all of your usual social media sites or hit up the one stop Blueprint spot by bookmarking THIS. 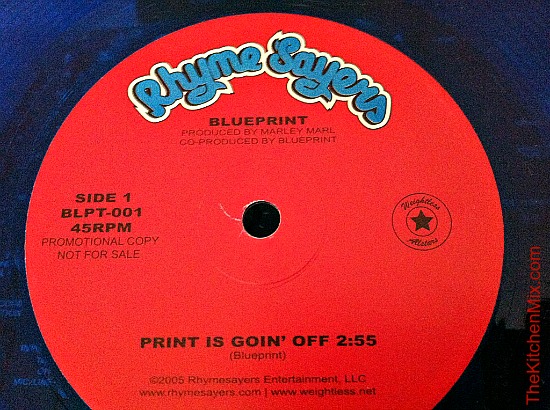 More treats on the way so keep it locked…

I read an article recently about famous historical figures and common misconceptions about them. Oftentimes, people know the names…