Life is full of inevitabilities. Some shit is just bound to happen – checking out a Tupac song you’ve never heard before, you’re certain to hear him rhyme something with “penitentiary.” You come up with a new snack to satisfy your sweet and salty fix, guaranteed you’re gonna see those chocolate dipped potato chips at your local grocery spot (or worse, the annoying lady at work’s gonna come in talking about, look what I found on Pinterest). Those are just a few of life’s inescapable realities.

Well, here’s another. You have two of Hip Hop’s most talented producers and culinary connoisseurs doing their thing in the kitchen and in the studio. Twenty four hundred miles away we’re over here serving up recipes by our favorite artists while spinning the freshest records from June to June. Our paths were destined to cross at some point. You could say that an interview, recipe trading and long distance feast was long overdue. It happened. It was inevitable.

You probably know 2 Hungry Bros. from their work with the AOK Collective. They’ve been busy doing their thing, creating the backdrop for some of our favorite artists (many of whom you may have noticed featured here in The Kitchen Mix) like 8thW1, Homeboy Sandman, Fresh Daily, and P.So.

Why not make this universal theme of hunger and eating go along with our music?

These Bros. have been feeding our musical palettes for years and now it’s time to see what they got for our taste buds. I knew from following Deep and Ben Boogz on Instagram that these dudes get down and go for theirs as much at the dinner table as they do behind the boards. And since we weren’t able to sit down here at the Kitchen and have a feast over beats, we sent each other recipes and prepared and ate them at a designated time – a long distance Hip Hop/Salsa/Funk feast. I floated them a recipe that we got from the great DJ Vadim – Daddy Vad’s Jerk n’ Ting (do not sleep on this recipe, I’ve been trying to get folks to prepare this, it’s kung fu to your taste receptors). 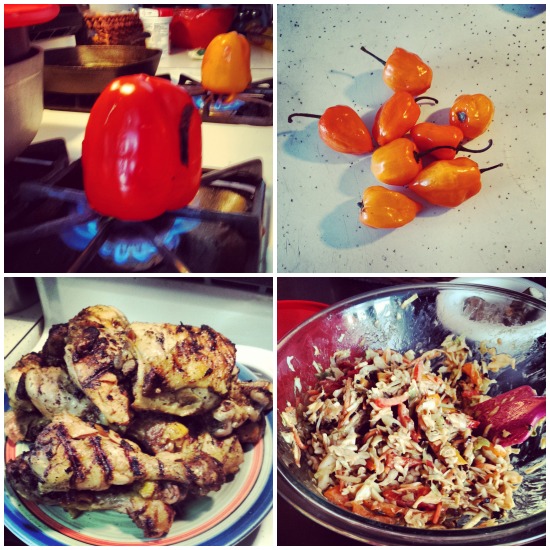 Meanwhile, they came thru with the Big-Pun-in-the-kitchen, can’t-have-just-two-servings, “you could get a smack for this, I ain’t no joke” Pastelon a.k.a “Puerto Rican Lasagna” b.k.a. “ah yeah son, again and again.”

Recipes to get you through those happy and sad times as well as food and music talk can be found below in the little snapshot of our conversation that I’ve transcribed for you. These dudes are some cool bros. who had me cracking up. They’re big on personality, big on beats and do it big in kitchen.

TKM: Let’s talk about the name, 2 Hungry Bros. How did that come about?

2HB: Well, first and foremost, we were friends since first grade – we grew up together always eating good food. From kids being kids, eating at our mom’s houses, growing up, everything always circulated around food, whether it was music or having fun. Why not make this universal theme of hunger and eating go along with our music?

TKM: What’s the relationship between food and creating music?

2HB: What’s funny is in early Hip Hop you had Flava Flav and The Flavor Unit – and I know it’s not directly food related but there’s all these little culinary things. Like, “Yo, I make it hot.” There’s certain things in the colloquialism that make us think about food, to begin with.

I feel like cooking and making and listening to music is like meditation and it’s good for my soul. I Know You Got Soul. I think the way we make beats, sample-heavy, we always try out different things. So, when we’re cooking it sorta correlates. The process almost feels like a lot of the same. The way his beats sound kinda correlates with the way his food tastes. And same with mine. It’s kinda crazy.

TKM: Yeah. So, while you were preparing the meal we’re gonna get into in a minute, did you have any music playing in the background? And what role do you think that kind of background music has as you prepare your meal?

TKM: It all just goes together beautifully, doesn’t it?

2HB: Yeah, it’s all the same. I guess how your mouth connects to your ear, right? You hear your food crunch so might as well make the beats…pop.

TKM: Do you guys ever make meals with artists you’re working with before you hit the studio?

2HB: Not really. When we were doing beats in the Lower East Side, we’d whip something up real quick in the kitchen. It all went hand in hand. But it was never a premeditated thing. It was always just freestyled most of the time. We get hungry, we’d eat. We’d get the veggie burrito at the Mexican spot in the Bronx – Grille Azteca. It’s not really planned, it just happens.

2HB: When we’re on the road in the car, we try not to eat too much crazy food because you don’t wanna get…you don’t want to have an accident. Our homie P.So usually packs pretty good stuff like Trader Joe’s organic dried mangos, cranberries and natural foods for the road. Advice to artists: try to keep it light on the road and when you get to your location, then go in.

TKM: Are you guys into healthier ingredients or are you conscious about what kind of grocery selections you’re getting?

2HB: I try to be but mostly I just buy what’s available to me in my neighborhood. I try to do turkey instead of beef – I just try to cook with whatever I got in the fridge. If I have the money for organic, I go organic. But if I don’t, I try to make the best of it.

TKM: Are you guys more likely to follow a recipe or just freestyle it in the kitchen?

2HB: Recipes just to get an idea. I guess you’d call it a makeshift cook, sometimes following the recipe to a t and sometimes doing the improv. Improv cooking.

TKM: If you could have anyone make you a meal, who would you have make it?

2HB: Barefoot Contessa, I’d love to eat one of her meals. I don’t want a guy to cook for me even though I think guys are better chefs. We cook better than our wives. When my dad would make something, it would always be better than my mom’s. Bobby Flay’s food looks really good. No, I’d like to have Salma Hayek cook for me. Man, that’s a good question.

TKM: What would you add, change, omit or rearrange in Biggie’s “t-bone steak, cheese, eggs and Welch’s grape” table spread?

2HB: Are we trying to save Biggie’s life? No, it was Big Pun that died of a heart attack. I mean, Biggie had his intake of iron – steak, eggs and bullets. Give him a kobe burger with some sweet potato fries on the side and just cut out the eggs, man. He don’t need no eggs. Maybe a cracker with some caviar on it.

TKM: Well, “have you ever been over to a friend’s house to eat and the food was just no good?”

TKM: Let’s talk about upcoming projects and what you’re looking forward to releasing.

2HB: Well, we have P.So right now, we’re working on a project with him. We’ve recorded a bunch of songs. We just released this project Obese with I Am Many, who’s also a personal trainer. He has his views on food, too. It’s funny how a lot of our guys are into food as much as music.
We also have a project with PremRock. His album is coming out April 11th.

I really enjoyed chopping it up with these 2 Hungry Bros. They have an extensive catalogue and you’d be doing yourself a favor by checking out 2hungrybros.com or hitting up their Bandcamp page. They’ve got their faces all up in Facebook and even tweet every so often on the Twitter. Check’em out and stay tuned for more of their funky fresh recipes. Find the recipe for the aforementioned deliciousness down below if you’re looking for something to impress your friends. It’s truly amazing and comes with the official, official Kitchen Mix Seal of Approval. Check it…

“Pastelon is something our parents and grandparents made – something we grew up with in our household. I thought a recipe like that would be cool for you to make and kinda get a feel for our background and where we came from. And plus it’s a hearty meal and we like food with different types of flavor.”

Pre-heat oven to 350 degrees. Butter square pan with 1 tablespoon of butter or you can use cooking spray.

Cook beef until brown and all of the juices bubble up. Add bay leaves, olives, and tomato sauce. Mix and let simmer for 10 minutes, set aside.

Heat a large frying pan with vegetable oil, just enough to coat the bottom. Fry plantains for 2-3 minutes on each side or until golden and slightly crispy. Drain on a plate with paper towel, set aside.

To assemble pastelon: Take your prepared square pan, start with a layer of plantains, then beef, then a fistful of cheese, repeat. You want to finish with cheese and plantains. Beat 3 eggs with 2 tablespoons of milk and pour over the pastelón. Let it sit for a minute allowing the egg to soak in. Top off with just a bit more cheese.