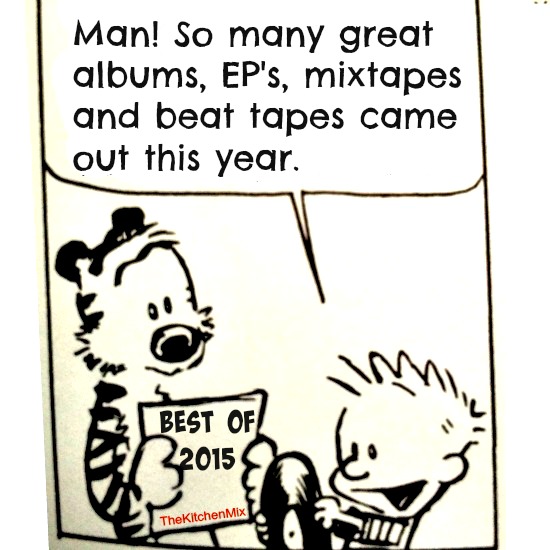 Music is changing. The whole industry, the way we purchase it, hear it and share it is changing. It used to go something like this – an artist would work on an LP, maybe put out a single beforehand to whet your appetite and then follow up with videos for various singles (if there’s money for that) after the release. That’s not the case anymore. Now, the rules have changed and you can pretty much do whatever you want to access as many people as possible. Free EP’s, mixtapes, collections of collaborations are all part of the new wave for artists today. Which makes compiling a list of my favorite projects very difficult. Some of the releases that I listened to the most weren’t even LP’s. But I’ve done my best to share with you some of my favorite (read: most listened to) projects of the past year. This is the collection of music that I talked about and shared more than any others in 2015.

1. Mellow Man Ace – The Lost Decade I love the vibe of this album. Cazal Organism provides the perfect backdrop for Ace’s updated rhyme style. The Lost Decade is a perfect example of what old-school-meets-new-school should sound like. It’s not too much of one or the other. The features throughout the project all add to the greatness of this release.

2. The Polish Ambassador, Mr. Lif, Ayla Nereo – Terra Bella There are items on this list that I enjoyed quite a bit on my own, in my car and in my headphones. But if there’s an album that got the most love with the family, it has to be this one. You can get a full track-by-track break down HERE.

3. Cazal Organism – On My Grown Shit I love the energy of young folks in music – their willingness to take risks, the hunger and energy. Unfortunately, too many try to emulate rather than create. Not the case with Cazal Organism. I was already a fan of this kid’s production but he added his voice to this project and upped his stock tenfold. You can tell by his style that he is truly a student of the game. There are a few moments on the album that remind me that my grown shit and his grown shit are separated by a few years. But this is an album that shows what youthful energy and creativity are capable of producing.

4. Kamasi Washington – The Epic Was anyone else as blown away by this 3 hour masterpiece as I was? Coltrane and Dolphy are surely looking down, smiling and thanking this brother for carrying the torch. If you’re truly a fan of Jazz, this is the album you needed in 2015. There are so many incredible moments here.

5. Cannibal Ox – Blade Of The Ronin How long has it been since the last Cannibal Ox release? If you were thinking “too long” then you probably spent just as much time with this album as I did. It’s 19 tracks of grit, grime and rhyme kata. Great production, features and random thoughts from Vast Aire kept this on heavy rotation this year.

6. L’Orange & Kool Keith – Time? Astonishing! There isn’t anything that L’Orange has put out that I haven’t liked. He’s got that signature style that makes any MC sound nice. Kool Keith on the other hand has been kinda hit or miss for me. No doubt, he’s dope. Sometimes…he’s just too out there for me. But this collaborative project? The vibe and mood of the production really mellowed Keith out and the result was exactly what I had hoped it would be.

7. Milo – so the flies don’t come & plain speaking Alright, I kinda cheated here. Milo released two really good albums this year and I’m going to included them both here. Both projects showcase dude’s stream-of-consciousness-spoken-word life commentary. This is smart rap for smart people. It’s more conversational than in your face. He’s like a Tarantino character that can rap but could take it or leave it. It’s laid back and witty and not for everyone but if you get it, you get it.

8. Dr. Yen Lo – Days With Dr. Yen Lo This is Ka. This is the intelligent hoodlum (yeah, I know there was already a rapper named that but he changed his name). I imagine if there was a blanket of conversation that floated up above NYC and just hovered there, Ka would be the man to collect little pieces of it and create art out of it. If you’re looking for boom bap, that’s not this. If you’re looking for those rugged beats and in your face lyrics, that’s not this. This is sparse production, smart, thought provoking glimpses into street life from a street artist.

9. Apollo Brown – Grandeur The production alone would have made this a great beat tape. But why put that out when you have access to some of the best MC’s the culture has to offer? Might as well tailor something for the greats like Sean Price, Oddisee, OC and young up-and-comers like Saga and Your Old Droog. This is for the true schoolers.

10. Blueprint – King No Crown I have to say, I’ve been following Blueprint for awhile now and he has never let loose anything wack. So it was no surprise that King No Crown was another solid effort from Printmatic. But, damn, I was super impressed with what he presented us with this one. The album grapples your attention with “The Talented Tenth” (one of the most featured songs on mixes that I made this year) and then gets progressively more experimental, digital and lyrical as you make your way to the final cut. I love to see established artists push the envelope and surprise us with something outside of what we’d expect from them. And that’s exactly what Blueprint did this year.

11. Fashawn – The Ecology To be honest, I had to come back to this album. I don’t think I had given it the attention it deserved when it first dropped. Luckily for me, I took the time to return to it and recognize it for what it really was. I remember going straight to the tracks with the features rather than listening to it in its entirety. That was my mistake. And honestly, it’s the tracks without the features that are the best.

12. Joey Bada$$ – B4.Da.$$ I don’t know what else to say about this album that I haven’t said already. I remember listening to Black Moon, Smif’n’Wessun and Heltah Skeltah for the first time back in high school. I imagine that listening to this dude as a young person must feel the same way. I’m not trying to liken Joey to those artists but he does bring the energy from that era into this era. And I’m very appreciative of that.

13. Kenn Starr – Square One I was wondering when Kenn was going to drop a new album and then out of nowhere…BOOM!…Square One. Continuing with their excellence in musical releases, Mello Music Group and Low Budget dropped another solid example of what music should sound like in 2015.

14. Oddisee – The Good Fight For how many years has Oddisee been on my end-of-the-year list? I don’t know but if he keeps putting out these quality projects I can expect this trend to continue. The Good Fight is a very good album but it pales in comparison to the live show that took him around the globe this year. More good production, more quality lyrics, same old Oddisee.

15. Skyzoo – Music For My Friends Skyzoo has continued to grow musically on each of his releases. He’s become one of those MC’s who, even if I haven’t heard anything off of the new effort, I’m going to support with a purchase. Music My Friends is as much music for his fans as it is for the friends. He’s working his way up my list of favorite MC’s. Definitely worth the time I’ve spent listening to it this year.

1. Equipto – Out Of Respect Equipto rhyming over beats from the likes of Large Pro, Premier and 9th wonder? This is a very good mixtape that stayed in rotation this year.

2. Raashan Ahmad – Collaborations This collection of joints that Raashan collaborated on was one of the best projects I supported this year.

3. Headnodic & Raashan Ahmad – Low Fidelity, High Quality (Vol. 2) Another Raashan Ahmad project. Only this one was all new material produced by Headnodic and recorded in 48 hours. Even though it’s only 6 tracks total, it feels like so much more.

5. Sean Price – Songs In The Key Of Price Sean Price may no longer be with us but his music is forever. The last project compiled before his untimely death is a lasting reminder of why he is considered one of the greatest.

6. DJ Platurn – TBOATCQV2 Platurn gave us volume 2 of The Best OF A Tribe Called Quest. Great, great mix. If I had one complaint though, it would be that I could have done without Michael Rapaport hosting it.

7. Your Old Droog – The Nicest Wish it would have been a full length but this EP was one of the nicest projects to come out this year.

8. J.PERIOD & Black Thought – The Live Mixtape: James Brown Edition Well, this actually came out in 2014 but it wasn’t released to all of us until 2015. This mix is incredible! Just a reminder that Black Thought is still a beast on the mic – don’t think that hanging out with Fallon softened him up or made him miss a step.

9. Lord Finesse – The SP1200 Project: A Re-Awakening This beat tape is exactly what you thought it would be. Lord Finesse creating your soundtrack on an SP1200.

10. Pete Rock – Petestrumentals 2 Pete Rock finally released a volume 2 of his Petestrumental series via Mello Music Group. The beats are on point. The entire instrumental project is dope but THIS is my favorite cut.

11. Saga – From Out Of The Shadows There were plenty of free releases that were worth downloading in 2015. Saga’s freshman effort was one of the best. This Marco Polo produced project definitely put him on the map. If you don’t have it yet, go get it now.

12. Batsauce – Jovie’s Toys and More Amour Two EP’s from Batsauce came out this year. One is an instrumental release and the other was made using kids toys and has some of the usual suspects going in over them.

13. Substantial – The Past… and Always Substantial continued to put out quality material this year. We got two EP’s that were well work the price tag. Now, here’s hoping that he’ll let loose a full length effort in 2016.

14. Name Science – Sweet Science & Rewrite Sach and Inoe Oner released Sweet Science for the Valentine season and then ended the year with a project that showed what they could do after reworking some classic joints. Sach used the original samples and recreated some of your favorite old school Hip Hop songs on Rewrite.

15. Deep – What You Leave Behind Deep of 2 Hungry Bros. stepped out on his own for this beat tape project that really impressed me. It’s got something for everybody and if you haven’t heard it yet, I urge you to get on that now.

16. The Other Guys – After The 9 To 5 The Other Guys have managed to work their way onto my list of favorite producers over the past few years. They’ve been providing beats for other MC’s but this go around they decided to put out a (mostly) instrumental project. If you’re ever over at our house for a gathering I guarantee you’ve heard some of their music during that time.

17. Homeboy Sandman & Aesop Rock – Lice This one came out of left field. I had no idea that these two were working on anything. It’s a great little EP that you can get for free. My favorite track is Environmental Studies.

In Hip Hop there are single words and short phrases that have become mantras: Word is an affirmation, Peace…